Declaration of conformity of a product based on EU legislation.

TecnoPMVA (from the Spanish acronym for Autonomous Variable Message Panel) is the commercial name of a solution developed by Tecnoseñal for the road sector. It is an automated information system presented as an ideal tool for controlling multiple traffic surveillance and regulation variables. TecnoPMVA, broadly speaking, has detected a series of control variables that affect traffic (meteorological variables, vehicle density, speed control, environmental conditions, etc.) and, depending on the ranges defined for each variable, a series of messages can be automatically generated that will arrive directly and, in real-time, to all the parties involved. The information will allow for decision-making, and the advance with which this information is received will allow for the decisions to be more appropriate. TecnoPMVA is a system that can be programmed so that this entire process is carried out automatically. In addition, it offers an important innovation compared to conventional panels: it will be powered autonomously through photovoltaic solar panels. The need for an electrical connection for its operation will become a thing of the past, and with it, the inability to signal in remote places where it was previously impossible due to the lack of electricity. Project co-financed, within the Innova Adelante programme, by: With the TecnOutdoor project, Tecnoseñal has developed an outdoor digital advertising sign applying the latest technology and materials efficiently and sustainably, reducing the current problems of thermal control that existing advertising signs encounter. The need in the market for this type of element was evident, and Tecnoseñal saw it as an opportunity to lead its distribution, thus forming a double strategic/commercial objective. The most notable advantages of this element are:

Tecnoseñal, combining its social commitment and its desire to innovate, has decided to undertake a project that serves to adapt signage to people with visual disabilities while keeping these signs highly resistant to the effects of the environment, such as weather conditions, the sun, etc., as well as possible acts of vandalism. Currently, there are adapted signage systems, but they do not meet the initial requirements established in this project: high mechanical resistance; high adhesion to the substrate; the possibility of using any colour; no need for dies, moulds, or screens; contained cost and the possibility to make braille dots, lines and high relief surfaces with the same material and system. This was the aim when carrying out the Brailletec project, which allows Tecnoseñal to acquire sufficient knowledge to implement new technology in order to meet all its requirements. This subsidy is subject to the provisions of Commission Regulation (EU) No 651/2014 of 17 June 2014, declaring certain categories of aid compatible with the internal market in application of Articles 107 and 108 of the Treaty. The project will be financed by the Autonomous Community of Castilla-La Mancha and, where appropriate, by the European Regional Development Fund (ERDF), through the ERDF Castilla-La Mancha Operational Programme 2014-2020. 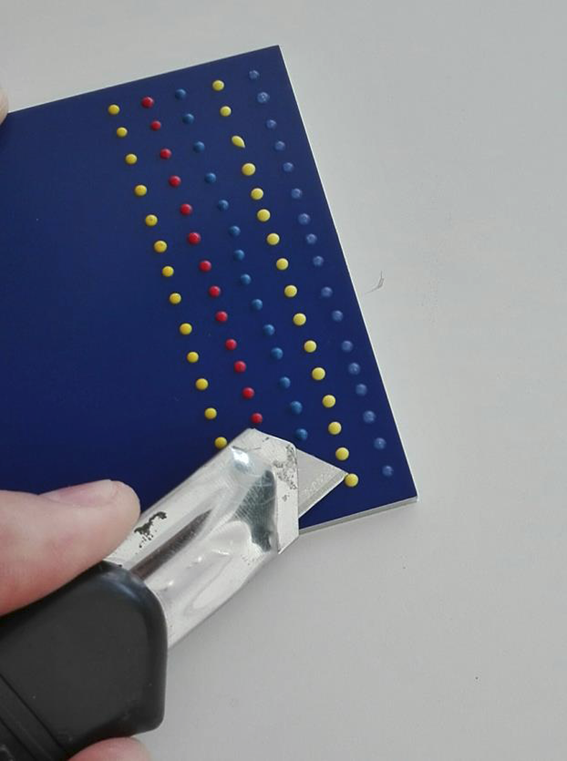 HYPRINT aims at researching new luminescent organic-inorganic hybrid devices made by printing methods to apply them in different high-consumption industrial sectors. Tecnoseñal is especially interested in the possibility of printing the devices with different shapes and obtaining illuminated surfaces instead of points. Seven leading companies in their sectors participated in the project, with an expected duration of 38 months, from November 2014 to December 2017, Taurus, Torrecid, Gráficasvaris, Implaser, Ficosa, and Tecnoseñal, in addition to Tecnove itself. HYPRINT has been co-financed by the Centre for the Development of Industrial Technology within the call for strategic projects CIEN (Spanish acronym for National Business Research Consortia) and the EUROPEAN REGIONAL DEVELOPMENT FUND (ERDF). SENSDIGIPRINT project Duration: 28 months. Execution time: 11/2019 – 2/2022.Research centre: Naitec. Budget: 831580 €. Financing: Partial co-financing by the Centre for the Development of Industrial Technology. Project co-financed by the European Regional Development Fund (ERDF). Place of execution: Headquarters of Tecnoseñal in Herencia. Technical objectives: The project’s main objective is to develop a new generation of furniture that incorporates functionalities providing interactivity. All of this is thanks to functional printing technologies to integrate electronic devices in the furniture. The new technology to be developed requires the adaptation of machinery so that it can be used in the new application. It will also be necessary to select materials, which will not necessarily be found on the market, so it may be necessary to request the development of these directly from the manufacturers depending on the project’s demands. This technology will allow offering products that do not yet exist in the contract furniture sector. With the development of this project, the following specific objectives are pursued:
1.- Production of electronic devices using inkjet.
1.1.- Capacitive devices.
1.2.- Card reader devices.
2.- Selection of suitable inks.
3.- Integration of the devices in the furniture and with the necessary electronics to provide the desired functionalities.

by the minister of economy